Skip to content
Home / User Blog/One thing leads to another, or just to add to my confusion!!

And so after managing to obtain a rare 1/32 scale model of a Ferrari 246SP and doing a little research on the car I was still left with a cloudy memory of the Rodriguez brothers having driven shark nosed Ferrari’s at Mosport sometime in the early 60’s. Finding that Innes Ireland had in fact driven a shark nosed 246SP in the 1962 race and not the Rodriguez brothers should have satisfied my curiosity. Just go ahead, build the car and enjoy it, right? What was it they say about curiosity??

At first I thought that I would see if I could dig up some of the old early 60’s slides my dad had taken way back when, hoping that would sort me out. I had been at most of those early Mosport races with my Dad and I hoped that many of my memories would improve when I saw the slides he took at them.

A bit (OK a lot) of hunting turned up the 1961 Player’s 200, the first international race ever held at Mosport in June of 1961, won by Stirling Moss in a Lotus 19. Lot’s of little Porsches there, but no Rodriguez brother’s and no Ferrari’s.

A bit more hunting and I found the Canadian Grand Prix for the Pepsi Cola Trophy, held at Mosport late in September of 1961. Apparently you didn’t need to be a formula 1 race to be a Grand Prix back then. 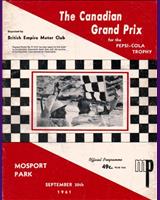 It was the first time a motor race had carried the name Canadian Grand Prix, which in future years would become an event on the F1 world championship circuit. The race was won by Canadian driver Peter Ryan driving a Lotus 19. 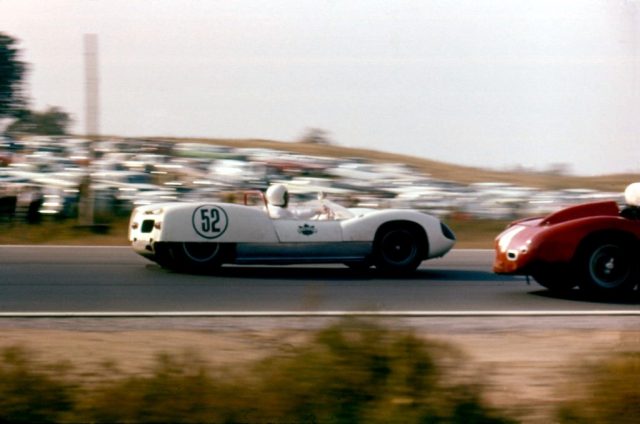 Peter Ryan in his Lotus 19 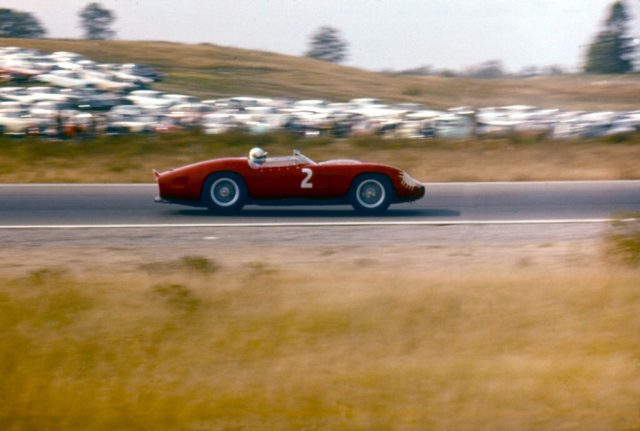 Pole sitter Stirling Moss was third in another Lotus 19 run by his Formula One team UDT Laystall Racing. 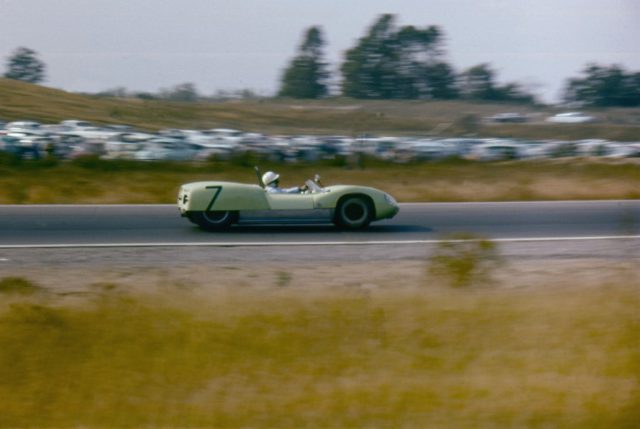 Stirling Moss in his Lotus 19

And then, there it was, Ricardo Rodriguez a DNF in a Ferrari Dino246S! 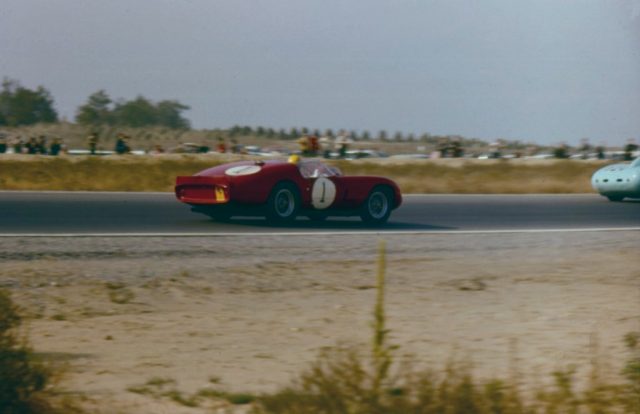 Ricardo Rodriguez in a Ferrari Dino246S

It looked like I might be zeroing in on the race I remembered but these were still front-engined cars. However a bit more hunting turned up that Pedro’s 250TRI had in fact had a shark nosed front end and that Ricardo’s car although front engined was in fact called a Dino 246S although it had a single front intake.

Pedro Rodriguez in a Ferrari 250TRI/61 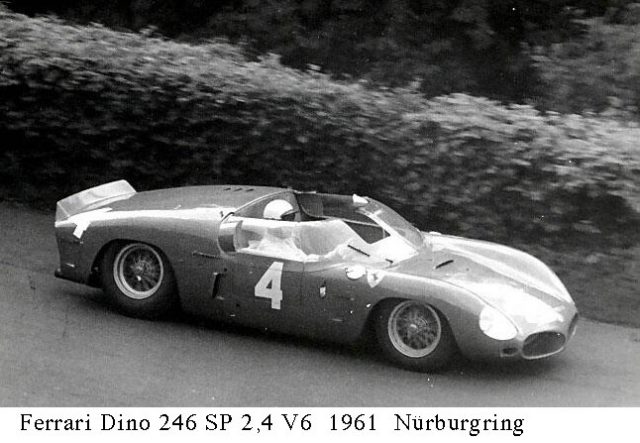 It seems that the bodywork for the 246S car had been developed and released earlier than the mid-engined chassis for the 246SP car, and that the shark nosed intake had been developed/used on the 250 TR cars prior to it’s use on the mid engined car. The 246SP merely brought all of these design considerations together into one car.

And thus the source of my confusion seemed at an end. It would certainly appear that while Enzo was dipping his feet into mid engined sports cars, he wasn’t entirely convinced that that was the way to go so he was still running the old front engined cars, albeit entered by privateers or pseudo factory teams at the same time as the newer mid engined models were under development.

Given the similarity of shapes of the cars, the cross pollination between new and old and the similarity of names it’s understandable how 60-year-old memories, created as a 10 year old, merged with a somewhat confusing chronology of Ferrari racers and came up with the remembrance that the Rodriguez brothers had raced shark nosed 246SP’s at Mosport. They still look remarkably similar to my eye. Having sorted through it, I’m still confused.

And since I was already looking at the 1961 Canadian Grand Prix why not add a few more old photos taken by my Dad back in September of 1961. 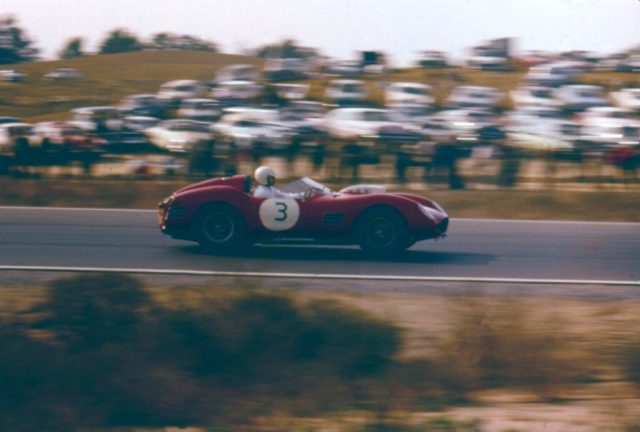 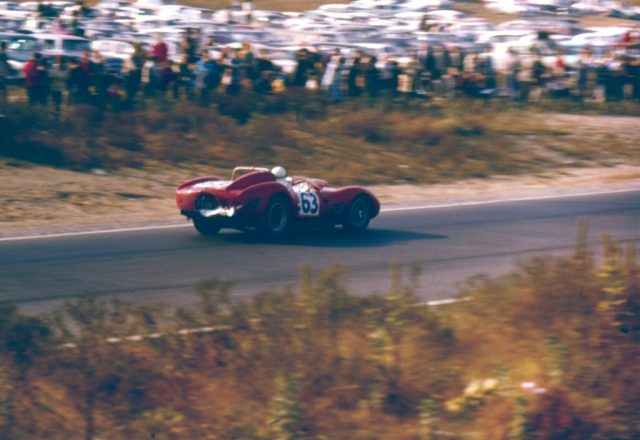 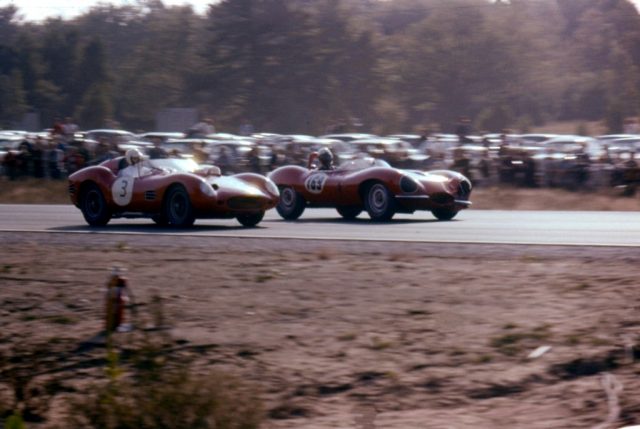 John Fulp and Nat Adams in a Jaguar XK-SS 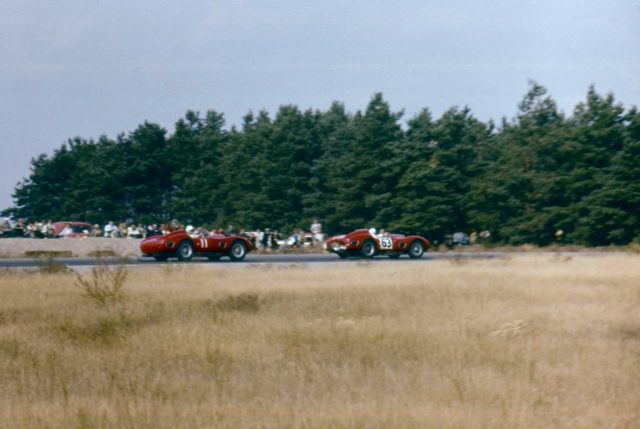 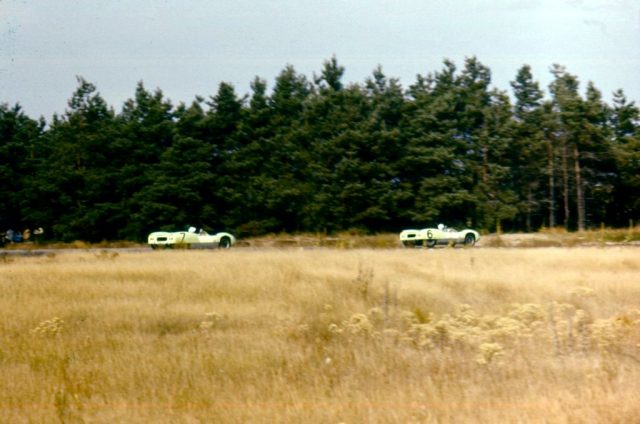 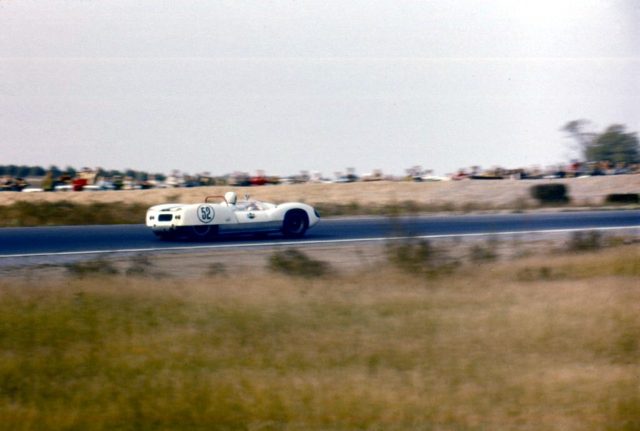 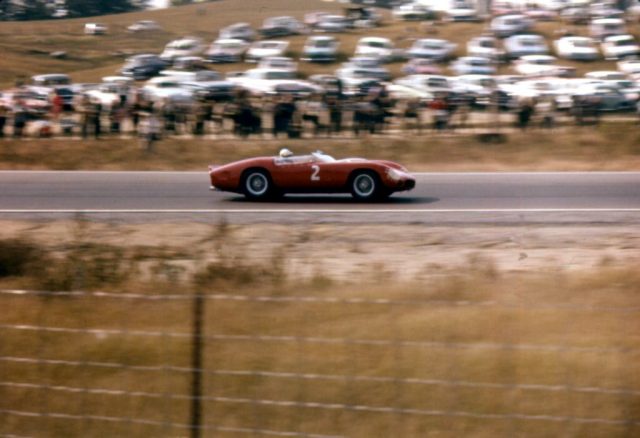 Pedro Rodriguez. You can just see the one side of the shark nose here 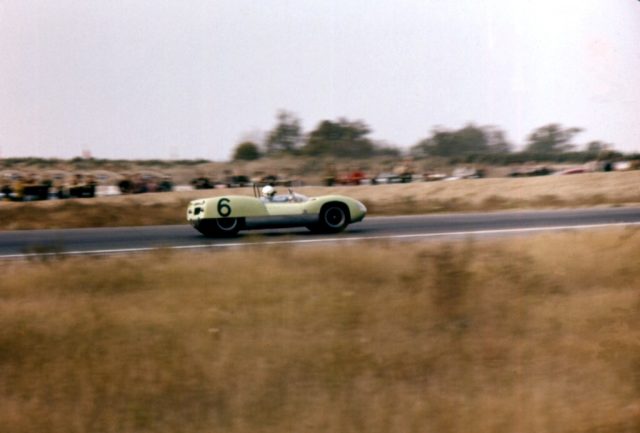 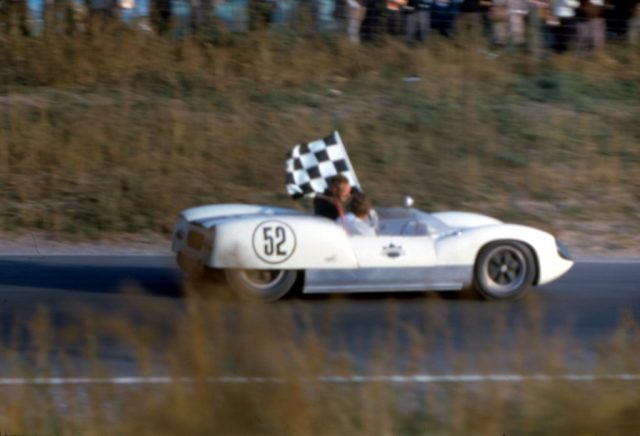 However, what I didn’t realize at the time was that I was witnessing the end of an era. Big hairy chested V12 front-engined sports racers were on their way out. Their place was being taken by smaller, lighter, better handling mid engined cars. This was one of the last fields to contain both types of cars racing competitively. Although the old guard would still carry on for a few more years -increasingly in the hands of privateers as the mid-engined technology matured- the writing was on the wall.

3 thoughts on “One thing leads to another, or just to add to my confusion!!”